The home automation / building automation world has developed several ways to enable devices to communicate with each other. One way of grouping them can be the way of communicating; wired and wireless.

A traditional way of designing an home automation system is by bringing all actors together in one (machine) room. Often there is space made in tech closet, a basement or at the ceiling. From this room there will be power lines routed to e.g. light points etc, and control lines routed to e.g. switches. In that way it is easy to change the function of the switch later on, you just change the wiring in the tech closet. This traditional way works perfect when building a new house and having the possibility to design all the wiring from the start. 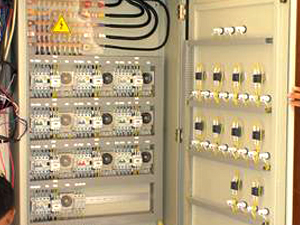 The described way of working above, in a traditional wired environment will not work in an existing environment. Redoing all the wiring and installing a central tech closet is too expensive. Alternatives came to the market which allowed a more flexible approach in existing buildings: they used the existing power lines as carrier for the sensor and actuator commands. Actuators can be placed behind the wall switches, and enhance the life of the users invisible.

A lot of these systems like X10, Insteon, Lutron or KNX are still in use. Problem with these type of systems is the poor quality controls in the signal. It is relative easy to disturb a signal, and the more actuators listen on the power line bus, the more risk there is of losing the signal. Mechanisms like triple sending, and filters are designed to improve the quality. Although they improved over the years, they are not considered to be best in class since most of them lack returning a status to the sender, leaving the control system in the blind if the command was accepted yes or no. Some systems like Xanura (Eaton Holec) extended the original X10 protocol with status messages. This improved the reliability of the system.

Later systems which came on the market made it possible to send and receive control signals wireless. This started often as an extension for existing systems, where next to the existing powerline X10, also a secure-wireless variant was developed. A lot of other systems and protocols were developed, all using the low power bands which are free usable to transmit signals. Depending on the part of the world you are in, you will find e.g. frequencies in the 433Mhz or 315Mhz band which are heavily used for temperature sensors, garage door openers, camera’s etc etc. Later the 868Mhz band in Europe (ITU region 1) and the 915Mhz band in the US (ITU region 2) where added for the same purpose.

These systems opened a lot of possibilities for home automation. Suddenly you e.g. can react on the outside temperature Oregon sensor by telling your X10 boiler switch to start heating the water. Most of these relative cheap systems like Oregon, Chacon, COCO (Klik-aan-klik-uit), Elro, Home-Easy and others lack status reporting, and act as a fire and forget system. They send a signal, assuming that someone will pick it up. Range and quality will vary heavily pending indoor and outdoor use, machines disturbance etc. These systems will work perfect in a relative small environment and as local add on. These systems should not be used in situations where devices must be reliable controlled. 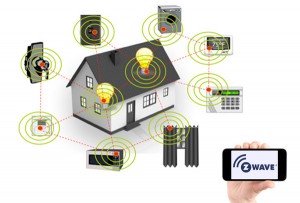 Next step in the market is looking for more robust solutions which can easily be deployed in all situations in a secure manner. This means finding a solution for the limited sending and receiving distance and also ensuring security. Are we sure we can trust the sender and accept the command? Systems build on protocols like Zigbee and Zwave can do the trick. Each new device must be “paired”  with the master before it scan be used in the environment to ensure security. By using a mesh protocol they allow for greater distances. Powered actuators will act as receiver and re-send the command to neighbors if a direct route does not succeed. Each node in the network has knowledge about his neighbours. By replying the status on each command the central system knows if a command is accepted by an actuator and can take measures if it did not succeed. This enhances the reliability of the system and makes it serious usable for home automation.

What’s cooking today are other methods of sending signals, all relying on wireless transmission. Low-Power Wifi, NFC, Low-power-USB are examples there. All methods struggle with the same problem: how to enhance signal and battery life which seem contra contradictionary. Coming years will show the winner in this battle.